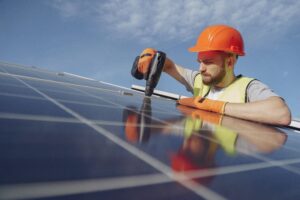 The usefulness of an architectural electrical plan:

Often readers ask me if this plan is really essential for an electrical installation – whether new or renovating.

In general, I answer by asking if they happen to go to an unknown destination without a map or without gps (or to go on vacation to the beach without the swimsuit)

More seriously, this plan is in my opinion essential: it allows you to clearly visualize the elements of the future electrical installation (sockets, switches, lights) in the home and to project yourself a little more into the use that you can make of it every day. days.

It will also be useful to you during your work so that you do not forget anything – it sounds silly but I can assure you that when you are “in the juice” sometimes it happens that information accumulates and omissions appear. Nothing could be more annoying than forgetting to pull out an outlet after all the partitions have been installed.

The symbols of the architectural electrical plan:

Before making the architectural electrical diagram, you must know the symbols that will be distributed on the plan: 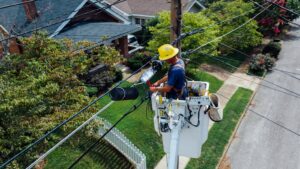 The method for making the architectural electrical plan

The first advice I can give you for establishing the architectural electrical plan is to project yourself into the room by asking yourself the following questions for each room:

Each of the answers will allow you to know which symbol of the electrical installation to position in the room, in the best possible place.

Best Electricians in the Pacific Northwest

Here are some highly reviewed and respected electrical architects that you can turn to for your plans:

You can rely on an experienced electrical technician to put together a plan that meets all regional specification and regulations. 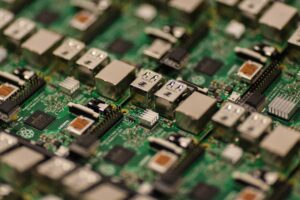 Electrical work requires attention at all levels. We often talk about being very careful when making electrical connections or working on the electrical panel. But we often forget the basics.

This is the case with a basic intervention, such as piercing.

And this reflection, I did not take it out of the hat! It was after an exchange with a plumber colleague who sent me a series of photos and a rather characteristic video.

Electricity drilling that has repercussions:

The case that I suggest you discover is quite “spectacular” since the craftsman drilled directly into the general power supply, before the meter.

At this level, no protection!

If the situation can make you smile, the consequences are less funny:

An accident that should have been avoided given that the craftsman who caused this problem was the site electrician.

State of the bit after drilling in the power supply

This is very stupid and valid even if there is no presence of electricity.

Before breaking through, you must always analyze the situation.

The last point is the most important because it concerns the holes in the presence of electrical networks.

You have to be able to know if there are wires and how the electric wires go through the material.

There are then two solutions:

Personally not having the vision of superman, here is how to proceed: 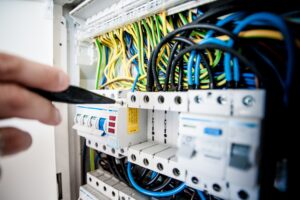 Analyze the surroundings and nearby electrical networks:

To visually detect the presence of electrical networks in a material, you must look at the exact location of the drilling and its immediate surroundings.

This check must be done vertically and horizontally, because the electrical networks (installed in the ICTA duct with the wires) are often pulled in these two ways.

In this example, the electrical networks arrive from above and from below

If in doubt, one solution is to open the electrical equipment to check the orientation of the networks arriving at the flush-mounting box.

Attention this manipulation must be done by cutting the electric current to work in safety.

For materials with construction vacuum, you can even remove the box and see more precisely how these networks circulate.

Check with the material detector:

Last solution to check the presence of electricity before drilling: use a material detector.

Secure the electrical installation if the damage is done:

It has happened to me to break through an alarm wire passed behind a partition, despite the usual checks.

Even if this wire was not physically protected (no icta sheath) and it had nothing to do there, I still had to fix my error.

It was weak current, so no danger. But what to do when you drill into a strong current electrical network?

The first thing to check is at the human level. It is an accident of electrical origin and the effects on the human body should not be neglected.

In the event of a minor incident and if the protections at the level of the electrical panel are present, the installation must go into safety with tripping of a RCD or a circuit breaker.

It is then necessary to secure the installation and the circuit concerned by isolating the protection concerned at the level of the electrical panel.

Electrical troubleshooting can only take place once the electrical installation is secure.

An intervention can sometimes seem simple but get complicated quickly.

This is the case with a bad drilling in an electrical network as I have just explained to you.

So to drill safely in electricity, you have to keep an eye and analyze the circulation of potential electrical networks!